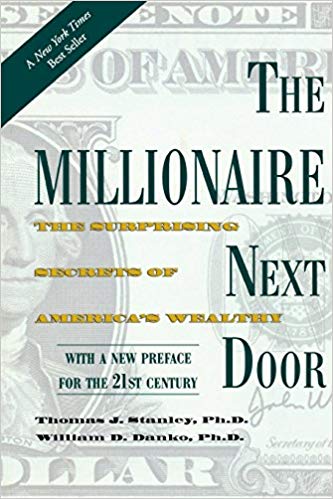 The advertising industry and Hollywood have done a wonderful job conditioning us to believe that wealth and hyperconsumption go hand in hand. Yet, the large majority of the rich live well below their means. Unfortunately, most Americans think that they are emulating the rich by immediately consuming any upward swing in their cash flow.

Wealth is not the same as income. If you make a good income each year and spend it all, you are not getting wealthier. You are just living high. Wealth is what you accumulate, not what you spend.

It is seldom luck or inheritance or advanced degrees or evenintelligence that enables people to amass fortunes. Wealth is more often the result of a lifestyle of hard work, perseverance, planning, and, most of all, self-discipline.

80% of America’s millionaires are first-generation rich.

Interestingly, self-employed people make up less than 20 percent of the workers in America but account for two-thirds of the millionaires. Three out of four who are self-employed consider ourselves to be entrepreneurs. Most of the others are self-employed professionals, such as doctors and accountants.

Millionaires have a “go-to-hell fund.” [FU Money] In other words, they have accumulated enough wealth to live without working for ten or more years. Thus, those of them with a net worth of $1.6 million could live comfortably for more than twelve years. Actually, they could live longer than that, since they save at least 15 percent of our earned income.

As a group, millionaires believe that education is extremely important for themselves, their children, and their grandchildren. Millionaires spend heavily for the educations of their offspring.

About two-thirds of millionaires work between forty-five and fifty-five hours per week.

Millionaires make their own investment decisions.

“I am my favorite charity.”

Multiply your age times your realized pretax annual household income from all sources except inheritances. Divide by ten. This, less any inherited wealth, is what your net worth should be.

Most people who become millionaires have confidence in their own abilities. They do not spend time worrying about whether or not their parents were wealthy.

Self-employment is a major positive correlate of wealth.

„I drink scotch and two kinds of beer — free and Budweiser!“

Allocating time and money in the pursuit of looking superior often has a predictable outcome: inferior economic achievement.

Millionaires became millionaires by budgeting and controlling expenses, and they maintain their affluent status the same way.

Over the past five years her annual income averaged around $90,000. But her net worth keeps increasing. Today Mrs. Rule has a net worth of more than $2 million.

QUESTION 1: DOES YOUR HOUSEHOLD OPERATE ON AN ANNUAL BUDGET?
QUESTION 2: DO YOU KNOW HOW MUCH YOUR FAMILY SPENDS EACH YEAR FOR FOOD, CLOTHING, AND SHELTER?
QUESTION 3: DO YOU HAVE A CLEARLY DEFINED SET OF DAILY, WEEKLY, MONTHLY, ANNUAL, AND LIFETIME GOALS?
QUESTION 4: DO YOU SPEND A LOT OF TIME PLANNING YOUR FINANCIAL FUTURE?

There are worse things than a budget, such as never being able to retire and never being financially independent. It’s much easier to budget if you visualize the long-term benefits of this task.

Only those clients with considerable wealth want to know exactly how much their family spends on each and every category.

Financially independent people are happier than those in their same income/age cohort who are not financially secure.

To build wealth, minimize your realized (taxable) income and maximize your unrealized income (wealth/capital appreciation without a cash flow).

It’s easier to accumulate wealth if you don’t live in a high-status neighborhood. But even those millionaires who do live in high-status areas realize only 6.7 percent of their wealth each year.

Even if you’re earning $100,000 a year, you’re not becoming wealthy. What you probably don’t know is that your neighbor in the $300,000 house next to yours bought his house only after he became wealthy. You bought yours in anticipation of becoming wealthy. That day may never come.

If you’re not yet wealthy but want to be someday, never purchase a home that requires a mortgage that is more than twice your household’s total annual realized income.

Overall, PAWs (Prodigious Accumulator of Wealth) have significantly fewer concerns and fears than their counterparts.

What if you spend much of your time thinking about a lot of issues that concern you? You will spend less time taking action to solve these problems.

Most of us want to be wealthy, but most of us do not spend the time, energy, and money required to enhance our chances of realizing this goal.

If your goal is to become financially secure, you’ll likely attain it. But if your motive is to make money to spend money on the good life, … you’re never gonna make it.

Mr. Allan recognizes that many status artifacts can be a burden, if not an impediment, to becoming financially independent. Life has its own burdens. Why add excess baggage?

The typical millionaire in our survey (one in the 50th percentile) spent about $29,000 for his most expensive motor vehicle. This equates to less than 1 percent of his net worth.

Gift receivers … the adult children of the affluent feel that their parents’ wealth/capital is their income … income to be spent.

Most people in this country are not the entrepreneurial type. But this does not mean that they can’t become millionaires.

Whatever your income, always live below your means.

What can you give your children to enhance the probability that they will become economically productive adults? In addition to an education, create an environment that honors independent thoughts and deeds, cherishes individual achievements, and rewards responsibility and leadership. Yes, the best things in life are often free.

Teach your own to live on their own.

Consider for a moment that you are a typical affluent parent. You noted that your oldest son or daughter even at an early age was extremely independent, achievement-oriented, and well disciplined. Your instinct is to nurture these traits by not trying to control his or her decisions. Instead, you spend more time helping your less resourceful child make decisions, or you actually make decisions for him. With what result? You strengthen the strong child and weaken the weak.

Suppose you have a ten-year-old child who goes in for a physical checkup. The examining physician tells you that your son or daughter is underweight and underdeveloped. How would you respond if the parent encouraged his child to eat less and exercise less?

Their goal was to have a daughter who would “never have to worry.” But the method they used yielded just the opposite result. People often attempt to shelter their children from the economic realities of life. But such shelters often produce adults who are in constant fear of tomorrow.

Courage can be developed. But it cannot be nurtured in an environment that eliminates all risks, all difficulty, all dangers.

You’ll be surprised how many sales calls you can make when you have no alternative except to succeed.

After even just a few years of receiving aggressive and overbearing economic outpatient care, Beth and her husband have lost much of their ambition, economic self-confidence, and independence.

Yes, you are more likely to become affluent if you’re self-employed. But what some of these reporters don’t tell you is that most business owners are not millionaires and will never come close to becoming wealthy.

They can take your business, but they can’t take your intellect!

PAWs need to achieve, to create wealth, to become financially independent, to build something from scratch. UAWs more often need to display a high-status lifestyle.